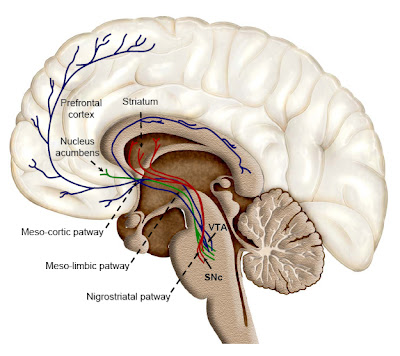 Parkinson’s disease (PD) is the most common neurodegenerative movement disorder, rising in incidence after the age of sixty. Clinically, PD is characterized by progressive motor symptoms (bradykinesia, resting tremor, rigidity, and postural instability), mainly linked to the degeneration of dopaminergic neurons in the substantia nigra pars compacta (SNc), which leads to depletion of dopamine in the striatum, the main target of the axonal projections arising from the substantia nigra (see figure 1). Despite the availability of effective symptomatic drugs, there is presently no cure for PD, and all attempts to slow the neuronal cell loss in the disease have failed.

Novel cell-based therapies aiming for a stimulation of endogenous dopamine production at a constant rate within the brain might provide a more physiological and elegant way to overcome the dopaminergic deficiency in Parkinsonian brains.

Neural stem cells (NSCs) derived from adult tissues are an attractive alternative source for cell therapy for PD. They overcome the ethical issues inherent to the use of human fetal tissue or embryonic stem cells. NSCs derived from adult tissue also open the possibility for autologous transplantations without immunological complications, where NSCs are taken out from the patient, expanded, differentiated and re-implanted back as dopaminergic precursor cells.

The discovery of constitutive ongoing neurogenesis in the adult human brain has challenged the traditional view of a fixed circuitry in functionally normal brains, and has raised high hopes that the adult brain may have the capacity for self-renewal after injury, thereby avoiding the need for transplantation. Primary neural precursor cells reside in specialized zones called “neurogenic niches”. A population of NSCs preserves enough germinal character to maintain neurogenesis throughout life and, once differentiated, their daughter cells integrate into already existing neuronal networks. Whether adult neurogenesis can be induced under certain circumstances in regions that lack constitutive adult neurogenesis remains controversial, but several studies have reported the isolation of NSCs from different regions of the adult brain, including the SNc.

The clinical motor dysfunction in PD is primarily linked to the depletion of dopamine in the striatum consecutive to the loss of the large dopaminergic neurons in the SNc. The classical view is that this is the result of a progressive degeneration process triggered by unidentified pathogenic factors. This hypothesis was challenged in 2001 by Armstrong and Barker (2001) who proposed the concept that the dopaminergic population in the SNc undergoes a continuous turnover with a low rate of spontaneous neuronal cell loss and an equilibrated rate of constitutive neurogenesis to replace the lost neurons. According to this concept, the reduced number of dopaminergic neurons in the SNc in PD would result from a reduced rate of adult neurogenesis rather than by an increased rate of neuronal cell loss. In 2003, Zhao and coworkers presented experimental findings which suggested that new dopaminergic neurons would indeed be continuously born in the SNc of adult mice to replace spontaneously degenerating neurons. According to this hypothesis, the dopaminergic neuronal population in the SNc would undergo a complete turnover during the lifespan of a mouse. Since then, the hypothesis that the generation of new dopaminergic neurons in the adult SNc could occur spontaneously or as a consequence of lesion-induced repair-mechanisms has received much attention.

Cells expressing polysialylated neural cell adhesion molecule (-NCAM), a sensitive marker of immature neuroblasts, have been detected in the postmortem substantia nigra of human PD patients. This has been put forward as an argument for ongoing neurogenesis in the adult human SNc. However, -NCAM is also expressed in reactive astrocytes and in neurites of mature neurons undergoing plastic changes. Thus, these findings do show that some degree of cellular plasticity is maintained in the SNc, even in aged human PD patients, but they are no strong evidence in favour of neurogenesis in the adult human substantia nigra in PD.

In the adult rodent SNc, the existence of cells expressing the EGF-receptor has been demonstrated, which characterizes rapidly proliferating neural precursor cells (C-Cells) in the subventricular zone (SVZ). Indeed, the adult rodent midbrain appears to contain progenitor cells with the potential to differentiate into astrocytes, oligodendrocytes and neurons, particularly dopaminergic neurons, once these precursor cells are explanted and grown in vitro. 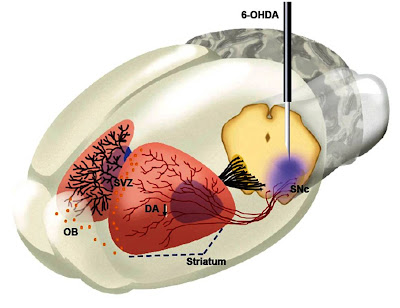 Dopaminergic neurons reside in the substantia nigra, pars compacta (SNc), which is located in the ventral midbrain, and send axonal projections to the striatum, which is situated in the forebrain. Neural stem cells are located in the adult SVZ, immediately adjacent to the striatum, with is rich in dopaminergic afferents from the SNc. The stem cells in the SVZ give rise to neuroblasts, which migrate along the rostral migratory stream (RMS) to the olfactory bulb (). In the 6-hydroxydopamine animal model of Parkinson’s disease, the nigral dopaminergic neurons are destroyed unilaterally by means of a stereotactic injection of the toxin, as indicated by the needle. The consecutive depletion of dopamine in the striatum leads to a decreased proliferation of progenitor cells in the SVZ (see figure 2).

However, it remains controversial whether these precursor cells can unfold their neurogenic potential within the parenchyma of the adult brain. There are some reports describing BrdU+ neurons with dopaminergic cytoplasm in the substantia nigra of rodents, which occurred either spontaneously or even more pronouncedly after experimentally induced degeneration of the nigrostriatal dopaminergic projection. So far, four articles have reported the existence of in vivo neurogenesis in the adult SNc of experimental animals.

Zhao and co-workers used several methods to provide evidence in favour of an ongoing turnover of the dopaminergic neuronal cell population in the rodent SNc. These authors described a constitutive nigral neurogenesis and, in addition, an increased neurogenesis in response to an MPTP-induced lesion of the nigrostriatal neurons. The authors suggested that the newly generated cells are derived from stem cells lining the cerebroventricular system. Unfortunately, the illustrations presented leave a degree of uncertainty about the newborn nature of the dopaminergic neurons, since the co-localisation of a tyrosine hydroxlyase (TH)+ cytoplasm around the BrdU+ nucleus is not unequivocally demonstrated in all three dimensions.

Van Kampen and Robertson (2005) reported that on average 10 BrdU+ cells can be found in the substantia nigra of healthy adult female rats, of which 15 % co-expressed the neuronal marker NeuN and 8% the catecholaminergic marker TH. These findings imply that a low rate of physiological neurogenesis seems to occur in the rodent SNc. By chronic infusion of 7-OH-DPAT, a D3 receptor agonist, the total number of BrdU+ cells was reported to increase to approximately 70 cells on average, of which 30% co-expressed NeuN and 20% TH. The authors concluded that D3 receptor stimulation would induce a strong precursor cell proliferation and would promote the expression of a dopaminergic phenotype in the newborn neurons.

One year later, Van Kampen and Eckman, (2006) published an increase of BrdU/NeuN/TH triple labelled cells also in a 6-OHDA rat model of PD, when animals were treated with 7-OH-DPAT. In contrast to Zhao et al. (2003), Van Kampen and Eckman (2006) proposed a local parenchymal origin of the newborn cells based on the absence of co-labeling with doublecortin, a marker for migrating neuroblasts. In the confocal pictures provided in this publication, the nuclear marker BrdU and the cytoplasmic marker TH are stained in the same cellular compartment, suggesting the rupture of the nuclear membrane, which is a typical feature of apoptotic cell death or antibody ‘bleeding’. Thus, it is uncertain whether the authors have indeed depicted genuinely newborn neurons or perhaps rather pre-existing neurons undergoing a form of mitosis-like apoptosis, which has been demonstrated to occur in the 6-OHDA and MPTP models of PD and in human PD patients. It might therefore be that the increase in number of TH+ nigral neurones in 6-OHDA lesioned rats after 7-OH-DPAT treatment, reported by Van Kampen and Eckman, does not represent neurogenesis, but rather other mechanisms of cellular plasticity such as phenotypic recovery or phenotype shifting.

Shan and co-workers reported findings suggestive of constitutive levels of neurogenesis, in particular dopaminergic neurogenesis, in mice. This phenomenon was reported to increase after MPTP-induced dopaminergic depletion. In their experiments, the authors used brain slices with 12µm diameter, which makes a correct interpretation of their findings impossible, since the nigral cell diameter can be up to 15µm. Thus, according to the rules of stereology, a newborn dopaminergic neuron with a BrdU+ nucleus can by no means be distinguished from a BrdU+ nucleus of an astrocytic satellite cell invaginated into a pre-existing dopaminergic neuron. Besides, in the pictures shown, the BrdU staining is stronger in the cytoplasm than in the nucleus, suggesting that the BrdU incorporated into the nuclear reflects an incorporation of a small number of BrdU molecules into the strand as occurs during repair rather than a comprehensive duplication during mitotic cell division.

Furthermore, several independent groups have tried unsuccessfully to obtain evidence of generation of BrdU+ dopaminergic neurons in the adult rodents’ substantia nigra in an unlesioned condition.

Even the additional exposure to factors known to increase neurogenesis in the SVZ or the SGZ, such as transforming growth factor-alpha (TGFα), glia-derived neurotrophic factor (GDNF), brain-derived neurotrophic factor (BDNF), platelet-derived growth factor-BB (PDGF-BB), liver growth factor (), or housing in an enriched environment and physical activity, did not lead to a detectable rate of neurogenesis in the SNc in a in vivo condition. It has been reported that an increase in the number of dopaminergic nigral neurones can be induced by the administration of GDNF. This effect, however, resulted from an upregulation of dopaminergic neuronal markers in already existing neurons rather than from the generation of new neurones. 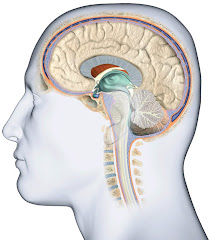